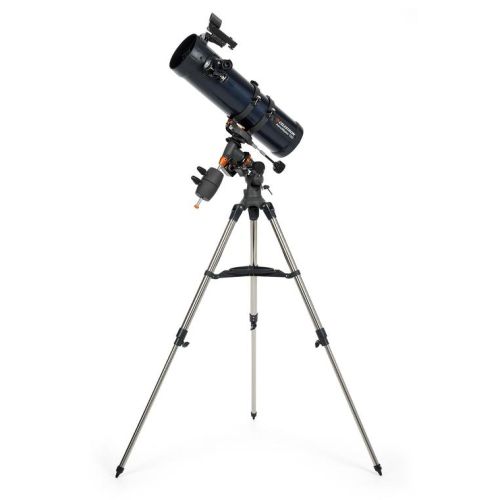 Discover our Solar System with the Celestron AstroMaster 130EQ-MD! You’ll be ready to observe in minutes thanks to the quick and easy no-tool setup.

Designed for beginners with a passion to take a step further into their astronomy hobby, the reflector telescope easily tracks and observes near and deep-sky ojects with a fast focal ratio for astrophotography or imaging. Its oversized parabolic mirror will provide bright, clear images of the Moon, planets, star clusters, and more!

The AstroMaster mount comes with two slow motion control knobs that will help you make fine pointing adjustments to the telescope in both Right Ascension (RA) and Declination (DEC) axes.

To boost you off quickly into your starry explorations, the Celestron AstroMaster 130EQ telescope kit comes with a 20mm and 10mm eyepiece, and a built-in Red Dot Finderscope (StarPointer). The two eyepieces offer different magnifications for low and high-powered viewings, and the 20mm has a built-in erect image corrector (to correct image horizontally and vertically for land-viewing/terrestrial use).

Easily turn your manual German EQ mount into a tracking mount by installing the included RA motor drive to your telescope. The RA motor drive compensates for the Earth’s rotation, so the telescope tracks sky objects' movement through the night sky from east to west.

With the telescope mount properly polar aligned (see link on how to polar align in the Southern Hemisphere) and the RA drive attached, you only need to make occasional adjustments in declination (Dec) to keep an object in the eyepiece for long periods of time.  The Celestron single-axis motor drive is designed with the essence of simplicity - It attches without any complicated nuts or screws, and runs smoothly on a 9V battery so there are no cords to get in the way and trip over so you can get started on your hobby almost instantaneously!

The motor drive can be used in both the Northern or Southern Hemispheres.  To change hemispheres, you'll just have to reverse the motor’s direction by simply flipping the N/S switch on the face of the motor drive. You can also change the motor speed by turning the “Speed Rate Regulator” knob - located just under the power indicator - in either direction, allowing you the ability to match different solar system objects which move at different rates (the Moon, planets, and deep-sky objects).

Included with your purchase is a free download of Celestron’s Starry Night Software. This advanced software by Simulation Curriculum offers detailed information about celestial objects and helps you plan your next observing or imaging session.