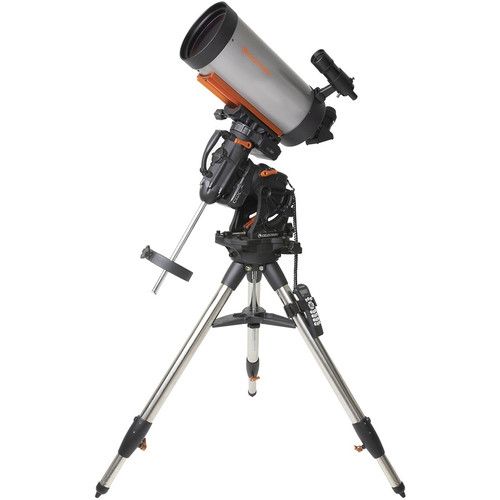 The CGX 700 Mak is a specialized instrument designed for detailed, high-contrast views of smaller celestial objects like planets, and up-close views of the lunar surface (including craters and maria). Maks are also well suited for hunting smaller, fainter, deep sky objects such as globular clusters and planetary nebulae.  Astronomers located in urban areas will highly appreciate the Mak’s ability to bring out more contrast in celestial objects.

Transporting the entire telescope package to a dark site is not a problem either. The kit disassemble into separate manageable pieces with no tools required!

As a catadioptric/cassegrain telescope, the light coming through a Mak passes through the corrector lens to the primary mirror and back to a spherical secondary mirror before it hits your eyepiece. Images are bright, sharp, and virtually free of chromatic aberration! Due to the secondary "spot" of reflective coating applied directly to the inside of the corrector plate, the telescope does not require frequent collimation like a Schmidt-Cassegrain. The spot is also significantly smaller than a traditional Schmidt-Cassegrain secondary mirror, giving the Mak its signature high-contrast views.

Note that you will need to allow more time for the larger, heavier Maksutov corrector plate to cool down and adjust to the ambient air temperature compared to a SCT of the same aperture.

The new CGX was designed to better support your telescope for both visual and astro-imaging pursuits. It is Celestron's new equatorial backbone to support a wide range of telescopes.