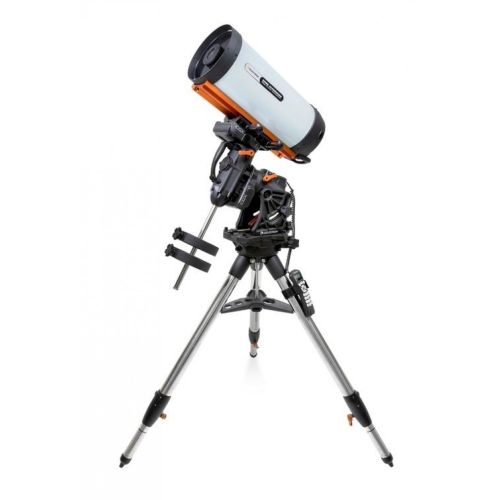 This kit consists of the 8” Rowe-Ackermann Schmidt Astrograph (RASA) with Celestron's sleek CGX German equatorial mount. All you need is to simply attach your camera and you'll be taking spectacular astrophotography of wide-field deep sky objects in no time.

Despite being the same size as the CGEM II, Celestron's CGX is a big step up in performance and features, especially for imaging applications.

RASA Performance Made for Everyone:

Capture spectacular wide-field deep sky images in seconds with Celestron’s new portable astrograph - the CGX Equatorial 800 RASA Telescope! This incredibly fast f/2.0 system is the perfect companion to today’s color astronomical CMOS cameras, smaller CCD cameras, and mirrorless cameras, and allows you to produce sharp, detailed images (skipping the autoguider completely in many cases). Furthermore, it's convenient and easy to transport at just under 8kg. Note that the 8" RASA is purely designed for imaging and cannot be used visually.

The latest addition to the RASA family, this 8” version is a much more portable and affordable version of the famous RASA 11. It delivers the same quality flat field without optical abberations, allowing you to capture stunning deep-sky astronomical images without the difficulties of longer focal length instruments, doing so at a much lower cost! It has many of the same thoughtfully designed features as its “big brother” RASA 11, including the integrated air-cooling system, internal filter mount, and sturdy CGE dovetail mounting bar.

Since it is an f/2.0 optical system, imagers can use shorter exposure times to capture detail in faint objects. When combined with sensitive cameras and the proper “live stacking” software, the 8” RASA can provide an almost real-time observing experience. The RASA will show images on a computer instantly that are brighter and more detailed than those using much bigger telescopes with the naked eye.

Focusing is easier, more accurate, and more stable than ever! Celestron unveiled a new focuser design that mitigates lateral movement of the primary mirror when focusing or tracking. The key to their ultra stable focus system is two sets of precision bearings that are precisely aligned (and individually tested during assembly) to ensure perfect results.

Unlike the larger RASAs that are designed specifically for DSLR and large CCD cameras, the 8” RASA was specifically created with color astronomical CMOS cameras, smaller CCD cameras, and mirrorless cameras in mind. The telescope does NOT work with standard DSLR cameras. It is optimized for sensors with up to a 22mm diagonal, and performs well with sensors up to 32mm diagonal. The APS-C sized sensors used in many mirrorless cameras are a good choice. 42mm full frame sensors will also work, but performance will be poor at the edges of the sensor and field illumination will be reduced. Additionally, we do not recommend pairing RASA 8 with any camera body more than 4” in diameter.

See the chart below to determine if your camera is compatible with RASA 8:

RASA’s optical design is patented. Unlike many telescopes that only perform well over the visible spectrum (400-700nm), the 8” RASA’s optics are designed to perform over a wider spectral range, from 390-800nm. This allows more of the light emitted from the astronomical object to be sharply focused in the image.

Celestron's engineers designed the RASA with a removeable optical window, so you can maintain peak optical performance if a filter is added or if a camera has its own optical window. Celestron offers a Light Pollution Imaging Filter designed specifically for the 8” RASA, which mounts in place of the optical window.

The new CGX was designed to better support your telescope for both visual and astro-imaging pursuits. It is Celestron's new equatorial backbone to support a wide range of telescopes.