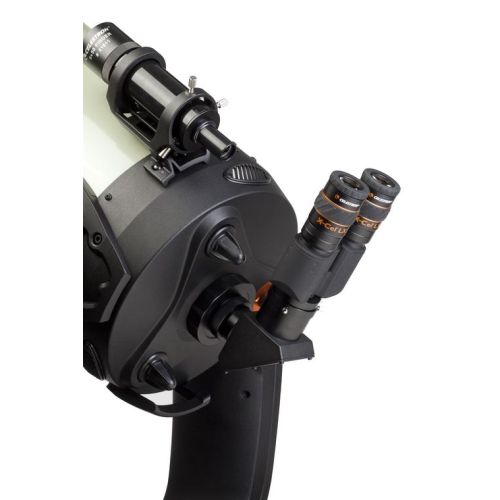 The Celestron Stereo Binocular Viewer is a great addition for catadioptric telescopes (Schmidt-Cassegrain, Maksutov-Cassegrain, etc.) as well as refractor-style telescopes. This unique product allows you to view objects using both eyes, creating a stereo image for more detailed and vivid viewing experiences. The use of dual eyepieces drastically reduces eye fatigue, so you're able to view for extended periods of time. It also provided much more detail, contrast and clarity in comparison to single eyepiece scopes.

The Celestron Stereo Binocular Viewer houses a 22mm Bak-4 fully multi-coated prism, increasing light transmission with no vignetting or light cut off, resulting in brighter high contrast viewing. Each eyepiece holder can be individually focused and the diopter is well marked, making subtle adjustments with ease. The 1.25" insert barrel is threaded and only requires one filter to effect both eyepieces, rather than using a filter for each individual eyepiece.

The Celestron Stereo Binocular Viewer weighs about 500 grams and uses approximately 3.5" of back focus. The case is surrounded by a well made rubberized coating, which makes it easy to grip even when using gloves.

The Celestron Stereo Binocular is a great addition for anyone looking to get the most of out their scope.