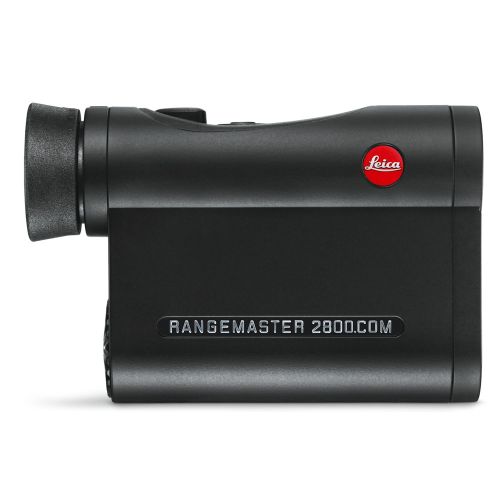 The Leica Rangemaster CRF 2800.COM is able to display precise distance readings out to 2560 metres, the first compact laser rangefinder capable of accurate measurements out to such a range. The device provides a rapid distance acquisition, measuring targeted objects at an average time of 0.3 seconds.The Rangemaster utilises Leica's equivalent horizontal range (EHR) technology. This technology uses a sophisticated IR laser that measures the line-of-site distance to a target in unison with an inclinometer that determines the angles-of-incline or decline of the target. A ballistics computer then makes the necessary calculations to measure the adjusted horizontal range of the target. EHR also employs sensors that read temperature and air pressure. The result is a highly accurate ballistic solution for the user.

Leica's Advanced Ballistic Compensation system (ABC®) is also integrated into the Rangemaster. This technology employs 12 pre-programmed ballistic solutions for the user to select, which are based on widely-used loads in conjunction with range, environmental, and angle factors relevant to a particular shot. Alternatively, the user can formulate their own ballistics solution via Leica's online ballistic calculator, accessed by way of the accompanying app. The rangemaster then receives this data directly via Bluetooth connectivity.  The app can work with an Android or iOS phone. Wind speed readings can also be acquired from a Kestrel 5700 Elite wind meter and similarly relayed directly to the Rangemaster via wi-fi for even higher precision. When using the pre-programmed ballistic curves distances can be measured out to 900 metres. When custom ballistic solutions are used the device can read distances to 1100 metres. When the Rangemaster is connected to a Kestrel 5700 Elite wind meter distances can be measured out to the maximum range of 2560 metres.

The Rangemaster has spot mode to distance single subjects and scan mode to continuously measure moving or multiple targets.

Under distances of 180 metres readings are displayed in decimal places. This feature is particularly important for archers.

The light weight and compact form factor of the Rangemaster enables the device to be easily held with one hand and to be carried in almost any pocket.

The Rangemaster CRF 2800.COM has a waterproof and fogproof construction to protect the optical and rangefinding components in any weather conditions and is water-pressure proof to a depth of 1 metre.

Leica Camera AG has remained at the forefront of premium Cameras and Sport Optics Industry since its roots in the early 1910s. With over a century of operation and continuous dedication to leading groundbreaking research and design, Leica has cemented their household name with distinctive discoveries that are unmatched by any competitor - such as the innovative Uppendahl prism system, internal baffle system that minimises stray light and HighLux System that maximises light transmission. From the highly acclaimed Leica Televid Spotting Scopes, Leica Ultravids Binoculars, Trinovids Binoculars and its history of tough, vigorous research, testing and quality control until it reaches your hand, Leica becomes more than a product, but an unwavering pursuit for perfection.