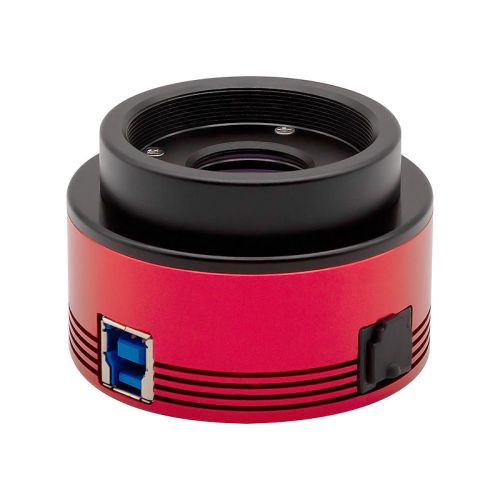 The ZWO ASI482MC USB3.0 Color Astronomy Camera is one of the latest OSC planetary cameras released by ZWO in 2021. Packed with Sony sensor IMX482, this camera has some very great highlights, including a large pixel size of 5.8um, compatible with USB 3.0 interface, large full-well depth of 51.5ke-, extremely high sensitivity and super low read out noise, etc. It is considered as one powerful iteration of ZWO after years of developing process in the field of planetary cameras.

The IMX482 sensor adopts back-illuminated CMOS structure. In resolution it is approximately the same as IMX462, but with 4 times the sensor size, it accordingly has a larger pixel size of 5.8*5.8um.

Sony is introducing SNR1s [lx] as an index used to quantitatively evaluate picture quality at low illumination. SNR1s [lx] is an acronym consisting of “SNR” (Signal-to-Noise Ratio), “1” (represents that the signal level when noise = 1 is 1), and “s” (for Security). The lower this value is, the greater the image quality will be at low illumination.

The 5.8um large pixel size allows unprecedentedly low SNR1s value of 0.08lx for ASI482MC. While ASI385MC is 0.13lx, you may see it is almost 2 times better, which brings the camera a fantastic nickname – “The King of the Night”.

With the full well capacity of 51.5ke-, ASI482MC displays rich star details when taking astrophotos. Coupled with the ultimately low SNR1s, the efficiency of date acquisition can be really high. This is particularly helpful for solar, lunar and planetary imaging, also makes the camera perfect for DSO lucky imaging (taking multiple photos in short exposure times and stack them to improve SNR.)

Moreover, thanks to the features above, ASI482MC can also be an ideal EAA camera or all-sky camera.

ASI482MC has a built-in HCG mode which can effectively reduce the readout noise at high gain and keep the same wide dynamic range as you would expect at low gain. When the gain is 80, the HCG mode will automatically turn on. The read out noise fall off a cliff while the dynamic range still can reach close to 12 stops. The minimum read noise is 1.5 e.

ST4 Port: Can be used to connect with auto guide port of mount for guiding.