SKU
ZWO-ASIAIRPlus
Be the first to review this product

We are now accepting preorders for the ZWO ASIAIR Plus. Please note that all new orders are expected be dispatched in late May 2022, subject to change. 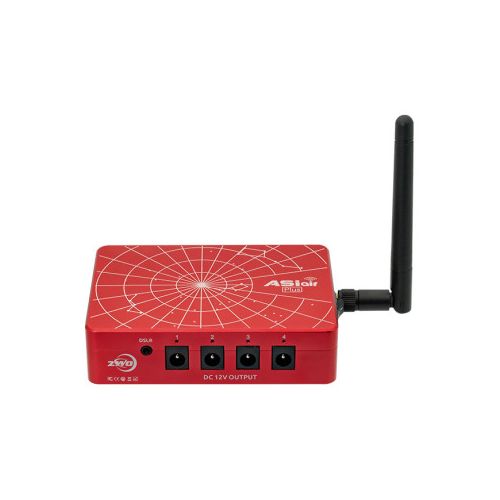 The ASIAIR is a smart WiFi controller for your astrophotography needs.

1. A built-in WiFi antenna - one key feature of ASIAIR Plus.

It can greatly increase the WiFi signal compared to the ASIAIR Pro, making the WiFi connection between your device and ASIAIR Plus more stable. The signal range will also be wider.

There will be a new update of the ASIAIR app when the ASIAIR Plus is released and you can check the power status easily and monitor consumption in real time.

It will allow you to directly connect the ASIAIR Plus device to your computer via USB cable to transfer data, instead of pulling out the SD card and using a card reader to transfer data.

Compared to ASIAIR PRO, the ASIAIR Plus has made some big changes in its appearance and weight: smaller and lighter. The ASIAIR Plus is made out of aluminum and processed by CNC tech, which will effectively prevent the ASIAIR Plus from dust and dew, also making the whole device sturdier and more durable. The top uses laser carving technology to show the constellations Cassiopeia, Ursa Major and Ursa Minor in the sky.

The new system will provide a smoother and more stable using experience. We also added a new feature: Auto Recovery Mode – When the ASIAIR Plus cannot boot up, the system will detect the faults and recover by itself. The internal storage of the ASIAIR Plus that is available for saving images and videos is 20GB.

Watch our ZWO ASIAIR Plus Overview and Setup on Youtube